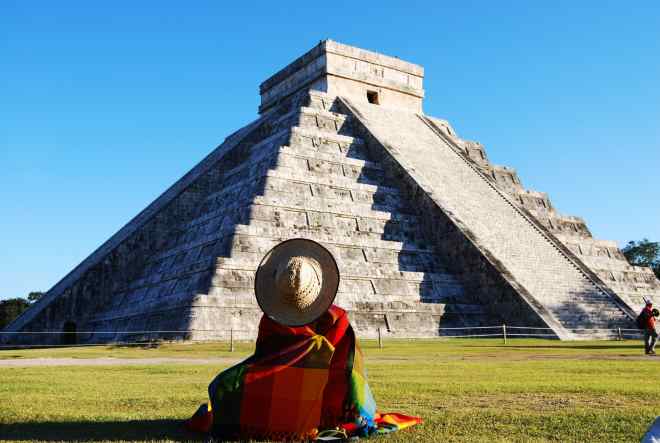 Mexico is a big and old country. Everyone can find something interesting in this land. Ancient pyramids and temples, big modern megapolises and tropical resorts – it’s all here waiting for you to come.

The trip to Mexico can be started with visit to its capital – Mexico City. It’s the third-largest metropolis in the world. Only Tokyo and New York City are bigger. This expansive city of 20 million and over a mile high is built on the ruins of Tenochtitlan, the ancient Aztec capital. Reminders of past civilization pervade the city, particularly at the Templo Mayor excavation and Anthropological Museum at Chapultepec Park. This very Tenochtitlan was founded in 1325 by Aztecs. Speaking about modern Mexico City, the district called the Zona Rosa is famous for its shops.
One of the must-sees in Mexico are pyramids of Teotihuacan and Chichen Itza. Teotihuacan is located 50 kilometers northeast of Mexico City. Teotihuacan is not only a monumental city, but also a place where the mural paintings allow the visitor to delve into a world of mythical figures of Gods, jaguars, nocturnal beings and liquid skies.

The ruins of Chichen Itza lie about midway between Cancun and Merida, so that the journey from each city takes around 2 or 3 hours via the new autopista. This place was a settlement of Maya tribe. The tribe itself sank into oblivion, but its creature still attracts millions of tourists and hundreds of investigators seeking for their archeological glory.

When you feel tired of ancient ruins and dust roads you can direct your steps to one of the Mexican resorts – Cancun, Puerto-Vallarta or Acapulco.

So, meet Cancun. Very popular resort among US citizens situated on the Yucatan peninsula. The city of Cancun is only 35 years old. This fashionable resort was built on the place of the former fisherman’s village. Cancun is world famous for its beaches, surrounding the whole city.

Puerto Vallarta is nestled between palm-covered mountains, a river and an azure sea. The city is full of cobblestone streets and whitewashed houses. Like Cancun, once it was a fishing village.

One of the most exciting resorts in the world, Acapulco is famous for its explosive nightlife, golden beaches, unlimited watersports, world-class hotels, restaurants and the breathtaking beauty of Acapulco Bay. Acapulco is located on the Pacific coast of Mexico and unlike Puerto Vallarta and Cancun it’s a big city with 2-million population.

Mexico is enjoyable year-round, but October to May is generally the most pleasant time to visit. The May-September period can be hot and humid, particularly in the south, and inland temperatures can approach freezing during December-February.

Top 5 Tips for Enjoying the Perfect Hike in Yosemite

AN OVERVIEW OF JAPAN FOR TRAVELERS