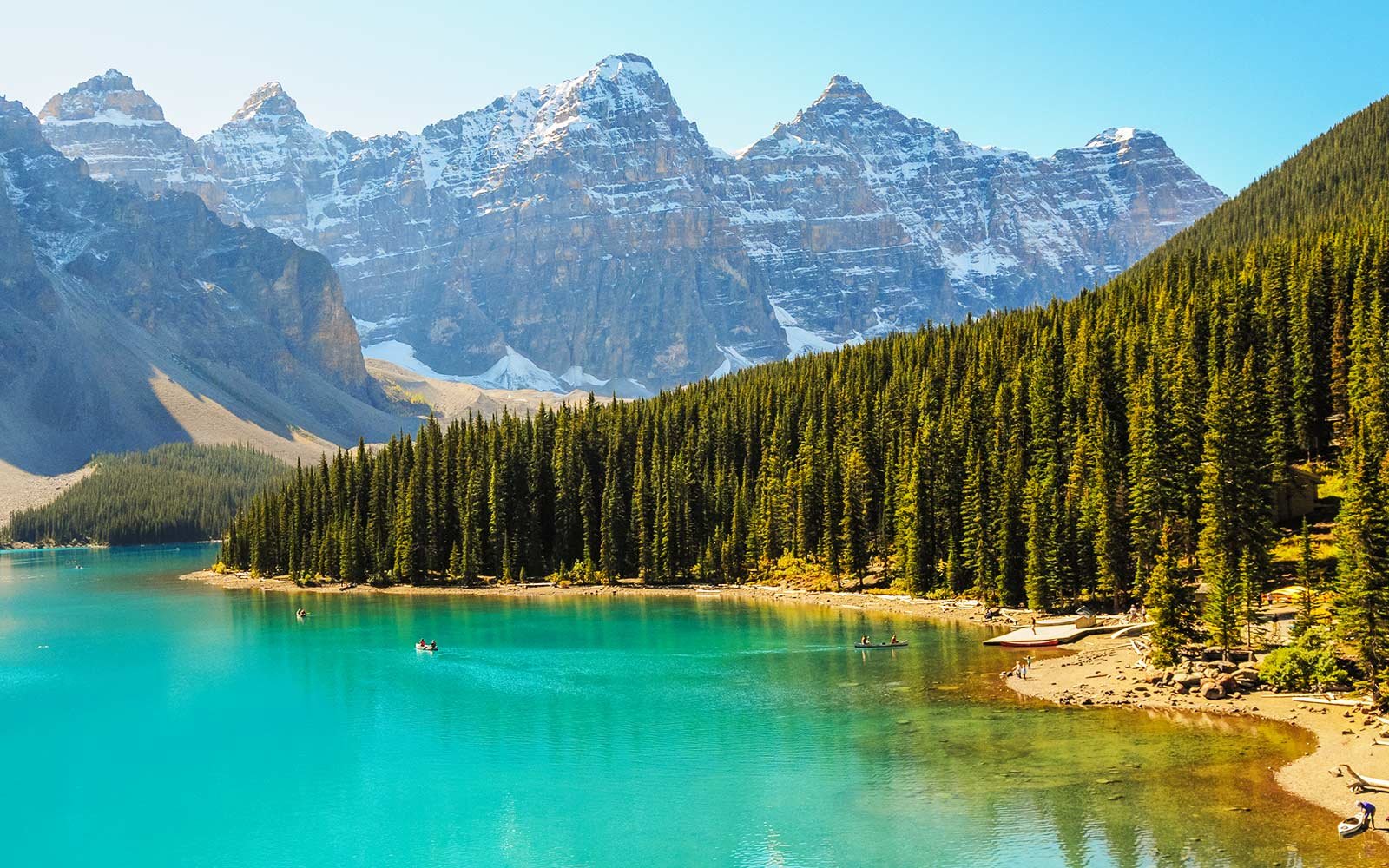 Canada is located in North America and stretches all the way from the Atlantic to the Pacific, being made up of ten Provinces and three Territories. To the North is the Artic ocean; Davis Strait on the North East separates it from Greenland, to the East is the Atlantic Ocean; the South is bordered by the United States of America and the West by the Pacific Ocean and Alaska.

A country of outstanding natural beauty, Canada has a wide variety of landscapes; the mountains, the prairies, lakes and rivers with many national and provincial parks to protect the habitats. With a total land mass of 9,984,670 sq km (3,855,103 sq mi), Canada is the second largest country in the world. There are more lakes and inland waters in Canada than any other country, in fact 7.6% or 755,180 sq km (291,577 sq) is made up of fresh water.

Most images of Canada refer to the Mounties, bears, snow or the Rocky Mountains with the amazing turquoise lakes though there is truly more to this vast landscape. Tourism is a large part of the economy with the abundant natural resources quickly turning Canada into a rich and vibrant country that is a permanent listing at the top of the best places to live. With distinct seasons – the winters are cold with plentiful snow and then warm summers, the best way to survive is to make the most of natures offerings. Skiing, snowboarding and snowmobiling are popular pastimes and great exercise and fun. In the summer, hiking, camping and exploring the great outdoors are fantastic ways to spend your free time. This is especially true when you are amongst the most breathtaking and fabulous scenery the world has to offer!

All motor vehicles are driven on the right hand side of the road and are left hand drive. Each Province or Territory is responsible for its own driving laws and regulations so each has a different system.

There are two official languages – English and French – and Montreal in Quebec is the world’s largest French-speaking city outside of France. All of the services offered by the Federal Government are in English and French. Almost every product you buy has English and French on the labels and most public services are available in both languages. Outside of Quebec the majority of people speak English; about 18 percent of Canadians are fluently bilingual.

The First Nations or Indian people were the original inhabitants of Canada and the name comes from their language and means “Village” or “Community”. The Vikings, who arrived in the 11th century and didn’t stay for long, were the first Europeans to land in Canada.

More Europeans arrived in the 16th century bringing with them manufactured goods which they traded for furs and native products – because of this they were made welcome by the indigenous people. The two main groups of European settlers were the French, who came first, and then the English. Despite France losing its part of the territory to Britain in a war in 1760, many of the French speaking people stayed. In 1867, three colonies of Britain merged in an event called Confederation; this created a partially independent state of four Provinces. Six more Provinces and three Territories have since been added and in 1931 full independence was achieved. Canada still belongs to the Commonwealth of Nations.

Public education is the responsibility of each Provincial Government (please refer to our Provincial pages for more information) and is paid for through taxes. Public education is free and all children are required by law to attend school from the age of 6 years until they are 15 or 16, the majority of students continue until they are 18 and graduate high school with a high school diploma.
The main languages of instruction are English and French.

Canada has a public health care system; essential medical treatment is available to all Canadian citizens and permanent residents. Although the health care systems are run by the Provincial ministries of health, the Federal Government sets the standards for health care across the country.

There are three Provinces that charge healthcare premiums (BC, Alberta & Ontario). In the other Provinces and Territories healthcare is paid for through taxes. In some Provinces there is a three month waiting period before you qualify for healthcare, (refer to http://www.onestopimmigration-canada.com/healthcare.html for more information) so you should make sure that you have insurance to cover any medical expenses for this period.

In essence such an article can never describe such a vast and beautiful country in adequate detail so if you are planning a visit or move go to http://www.onestopimmigration-canada.com/canada.html for detailed information.

Planning Caribbean Cruises: 4 Destinations For A Trip Of A Lifetime