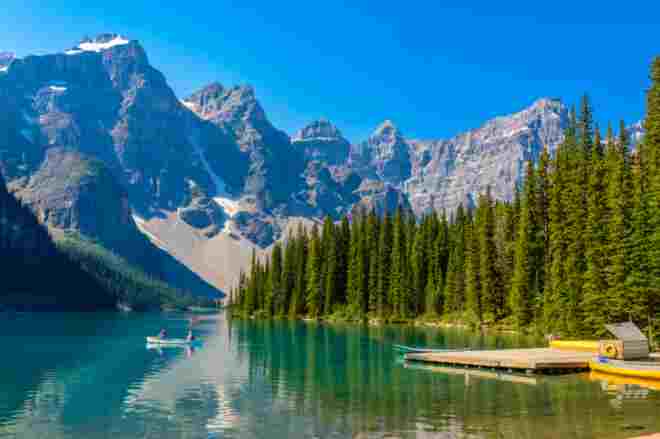 The Province of Alberta is approximately 255,200 square miles in size and boasts incredible scenery and abundant natural resources. It is situated between the provinces of Saskatchewan to the East and British Columbia to the west, with Northwest Territories to the North and the state of Montana, USA bordering the south.

Alberta is in the Mountain Time Zone which is Greenwich Meantime -7 hours. Between the months of April and October Daylight Saving is in effect and the difference is GMT -6 hours.

There are two main cities, Edmonton (The Provincial Capital) in the north and Calgary in the south. Edmonton is located approximately 300 kilometers north of Calgary, with a healthy rivalry between the sports teams and the populations in general. There are several other Towns and Cities that have a lot to offer including Lethbridge, Red Deer, Brooks, Medicine Hat and Fort McMurray to the far north.

The Provinces landscape is extremely varied and provides a multitude of Recreational Possibilities. From flat open prairies, raging rivers, turquoise lakes and majestic glaciers to the awesome beauty of the magnificent Canadian Rockies.

Not surprisingly, the most prized assets of the province are the Banff and Jasper National Parks, coupled with the pristine Kananaskis Country. Banff is by far the more commercial with the Mount Norquay, Sunshine and Lake Louise ski hills close by. The town is a beautiful place but becomes fairly crowded during the summer and winter with tourist/skiers flocking to the town. Bears are a fairly common sight all around the area and there are often deer roaming around.

The world famous Ice field Parkway offers one of the most breathtaking drives in the world as it winds through mountain passes and past enormous Glaciers and emerald blue lakes. Be warned, photographs and video’s do not do justice to the scenery as to appreciate the enormity of the area you have to stand there and take it all in. Once you complete the drive, you will have passed the Columbia ice field where snow coaches will take you for tours on the Glacier. The Town site of Jasper awaits at the end of the parkway and offers a less commercialised mountain town experience. The stunning Maligne Lake and Maligne Canyon are a must see and there are sight seeing tours up the Jasper Tramway to the Whistlers summit (2470m high). Please note that you will need a valid park pass to stop in any national park or to drive on the Ice Field Parkway.

Alberta has the lowest overall taxes in Canada (Provincial tax rate is 10%) and is the only province that doesn’t have a provincial sales tax. It boasts one of the worlds most vibrant and competitive economies that thrives on the back of massive oil and gas resources with the massive Oil sands projects in the far north promising more Oil than Saudi Arabia! The recent mad cow crisis has damaged the famous Beef industry though this will hopefully be resolved soon. The Provincial Government actively encourages Business Development and investment; this in turn fosters the economic growth and performance that is leading Canada’s economic recovery. Alberta is now debt free as a Province after paying off over $20 Billion mainly due to the massive oil and gas revenues.

As with all the Provinces, Alberta regulates its own Education System. Currently, the education budget is receiving a great deal of attention from Albertans who are pushing hard for more investment. Also, the money previously used for debt servicing will now be made available for infrastructure investment – billions of dollars have been allocated to this.

The Provincial agency for assessment of foreign qualifications is The Edmonton based International Qualification Assessment Service (IQAS). This service is critical to enable Canadian employers assess your education and was also a requirement for the visa application when we applied.

Also on the self regulation list are Driver Licensing, Workers Compensation Board, Social Welfare Program and a Provincial Nominee Immigration Program. Professional regulation is also governed at a Provincial level – all the information can be found through our “Job search” pages.

The major political concern for the Alberta Government (headed by long serving Premier Ralph Klein and his conservative party) is the Provincial Healthcare system. All Canadians want extra funding to forestall what is perceived as a deteriorating service. I must admit that it is definitely better funded per capita than the UK for instance. The Federal Government is paying out several billion dollars to help out over the next few years and the Provincial Government is making it a priority as well.

Alberta has a rich history from the prehistoric days of the dinosaurs, the time of the first nations ruling the land, through western settlement and the journey towards independence. There are several world heritage sites in Alberta with the main two being the very impressive Royal Tyrell Paleontology museum near Drumheller and the Head Smashed In Buffalo Jump site near Lethbridge.

The Tyrell museum is a world leader on Dinosaurs with some fantastic displays that are a treat for any family. The Head Smashed in Buffalo Jump is an amazing interpretive centre that demonstrates how the native Indians joined together at certain times of the year for the big buffalo jump where they skillfully drove herds of buffalo over a cliff. When successful enough food was gathered for the participants to get them through the winter and all parts of the buffalo were used. Unfortunately, the arrival of the western settlers destroyed this way of life with the buffalo hunted to near extinction.

Alberta is a fantastic place to live or visit and the sheer number of Canadian s moving to the Province is testimony to the lifestyles on offer. With the future promising increasing revenue’s from the Oil and Gas industry and massive investment Alberta is the place to be. The majestic rockie mountains provide fantastic recreational possibilities that are virtually unsurpassed anywhere else in the world.

Find The Best Hotel Deals For Your Next Vacation

The Ahwahnee Hotel in Yosemite Valley: A Great American’s Dream