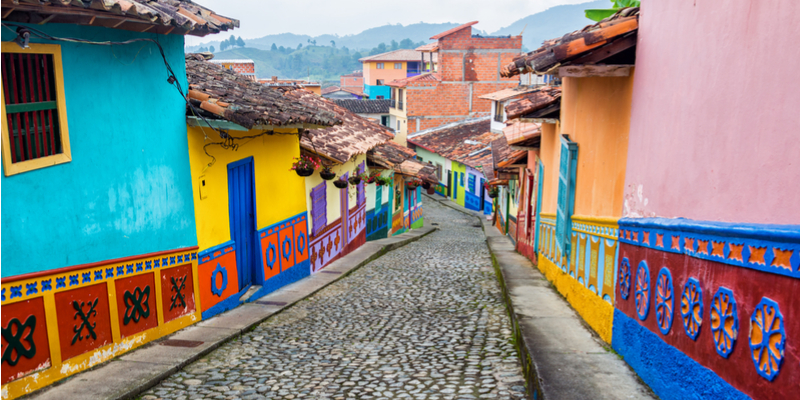 Colombia, the Republic of Columbia is a country in the north west of South America. The country of Colombia is bound to the north and north-west by the Caribbean Sea, to the east by Venezuela and Brazil, to the south by Ecuador and Peru, and to the west by Panama and the Pacific Ocean. The official language in Colombia is Spanish. The capital city of Colombia is Bogotai, with an estimated population of 44,000,000.

Colombia with a total area of 1,138,910 sq km is the fourth biggest country in South America. This rank of fourth comes after Brazil, Argentina and Peru. This area can be devided up into land, 1,038,700 sq km, and water, 100,210 sq km. Although it is in the Tropical area The <a href=”http://www.pixibot.com/60-colombia” target=”_blank”>Colombia</a>n climate, is made different by the influence of the Andes mountain range. Colombia is tropical in the coastlands and lowlands and can get very cool in the mountains.

The eastern half of Colombia, which is more than half its total physical size, is plain and composed by rainforest. Colombia is crossed by rivers which belong to both the Amazon and Orinoco basins. The northern part of Colombia is called “Los Llanos”, it is a savanna region. Colombian Pacific Plains at times of the year are among the most rainy parts in the world!

Until roughly 30 years ago, Columbia was a peaceful country. Rebel groups and the influence of cocaine production have changed that. Here’s an overview of Columbia for travelers.

Overview of Columbia for Travelers

In 1978, political disputes and corruption led to rebel groups pursuing violent insurrection attempts. The primary groups were the Revolutionary Armed Forces of Colombia (FARC) and the Democratic Alliance/M-19 (M-19). These two entities have subsequently pursued a civil war against the federal government, often controlling parts of the country. Since 2000, the rebel groups have lost much of their ability and no major attacks have occurred.

Starting in the late 1970s, the cocaine industry became big in Columbia. Cartels formed to control production and became rich and powerful in the late 80s. Efforts by the government to control the cartels led to open violence and massive corruption. In the late 90s, the massive cartels were finally broken up. Cocaine production hasn’t really been effected, it is just controlled by smaller, more discreet cartels.

The official name of the country is Republic of Columbia. Columbia covers an area of about 440,000 square miles and is the fourth largest country in South America. The capital is Bogotá with a population of just over 7 million people. Other major population areas include the cities of Medellin, Cali and Cartagena. The terrain in Columbia varies from rugged mountains to coastline on the Pacific Ocean to flat grasslands. Temperatures are generally warm and humid with the exception of cooler climates in the higher mountain areas.

The people of Columbia are known as Colombians. The total population is just over 46 million with a growth rate just under two percent annually. Roman Catholic is the dominant religious faith and Spanish is the language. Literacy rates are 93 percent in urban areas and 67 percent in more rural locations. Life expectancy for a Columbian man is 69 years and 75 for a Columbian woman. Ethnic break down is primarily Mestizo at 58 percent of the population followed by white at 20 percent, mulatto at 14 percent and black at four percent.

As these facts on Columbia reveal, the country is going through a massive period of destabilization with narcotics and guerrilla warfare an overwhelming problem. Only the future will reveal whether Columbia pulls out of the mess.

Factors to Consider When Choosing a Cruise Line

A BRIEF GUIDE TO ANDALUCIA, SPAIN

AN OVERVIEW OF SWITZERLAND FOR TRAVELERS