Home Places GREECE – THE MOST ADMIRED LAND ON EARTH 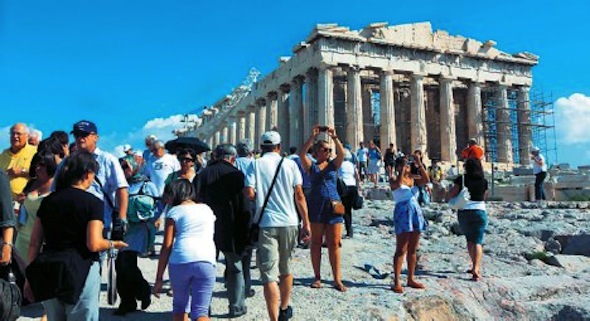 Greece is widely regarded as the place where the western civilization was born many centuries ago. It is widely acknowledged as the guiding force that has driven the human civilization for over 2500 years now. It is also the place where three continents, namely Europe, Asia and Africa, and three varying climatic conditions submerge into one. These enthralling shades make it one of the most visited places on earth today. Roughly 16 million tourists walk on its soil every year, thus allowing several hundred thousand Greek nationals to be employed by its tourism industry. Located at the southeastern fringe of the European peninsula, Greece is spoken of highly for its world class beaches, lavish hotels and the level of hospitality it offers. Hotels in Greece are an integral part of its tourism infrastructure, which earns around 15% of the nation’s entire GDP in revenues.

Rich visuals may be recalled; if one began examining how the events of Greece had benefited the world we are part of. It was Greece that first gave the idea of democratic governance almost 2500 years ago. The word “democracy” itself stemmed out from the Greek language, meaning the rule of the people. In spite of its initial doubts, the Greek democracy survived on and was later followed by many other states. Modern states are often seen mimicking the same federal structure that Romans established around 2000 years ago. However, it should be noted down for academic reasons that Romans were more of an autocratic regime, as their later years suggest. Only parts in and around Athens had democratically elected councils to look after their people.

Greece also gets known for having gifted the world with Modern Olympic Games. It was Athens in 1896, where the first Olympic Games were organized after its modern-day revival. Olympic Games have since become a rallying point for the players and athletes from all over the world to compete and people from varying backgrounds to mingle with each other. Remains of the ancient Olympia stadium were excavated and restored in the middle of the 20th century. It is the same location from where the Olympic Flame starts its journey and gets carried to the game venues. These and many other exciting stories may suggest why Greece has been admired for ages now.

The world loves visiting Greece in huge numbers as a result, providing an immense boost to its tourism infrastructure. Its scenic Mediterranean coastline and the yearlong pleasing weather make holiday making fun and frolic. Athens, Peloponnese, Cyclades and Crete are some known cities carrying immense historic significance, where most travelers prefer heading on to. Hotels in Greece would be seen having high occupancy rates throughout the year, in this process, and one should plan their journeys in advance, for the same reason, to make their trips hassle free. Travelers can buy both cheap and high end accommodation from hotels in Greece, and also try to get best deals from tour operators, which include last minute holidays.

There is enough online support available for those who might be willing to book their accommodation from hotels in Greece. Sea-side resorts and self-catering apartments should also be taken into consideration apart from prime hotels in Greece for garnering accommodation. Planning out in advance should make your Greek journey memorable, since there were plenty of activities to be entertained from apart from visiting the usual heritage sites.

Cyprus Flights – Getting The Best Deals

An Overview of Charter Flights